12 Things about Life in Cameroon

We thought we would share about everyday living here in Cameroon. While some of these may sound like complaints, we really do love it here. It just takes some getting used to.

I don’t generally have high expectations, but I’m definitely not a pessimist. I prepare for whatever eventuality I can, and try to do my best with the lot that I’m handed. For example, I’ve gotten to the point that I don’t expect every meal to be tasty or complete, as long as it’s filling, but of course I still get excited when something is tasty. In the same way, I don’t get fixated on the way things are “supposed” to be or how I was told things would be here in Cameroon.

Before arrival in Cameroon, it was confirmed several times that we would be in apartment 19. This is an upstairs apartment in a four-plex with a small balcony. Upon arrival, even the guy that picked me up from the airport was surprised to find that 19 was locked and instead apartment 16 was open for us. The groceries that Teresa’s boss had bought her were in 16, along with a welcome sign drawn by her daughter. Apparently, a last-minute housing decision was made for us while we were somewhere over the Mediterranean.

The big advantage of an upstairs apartment is that you literally take the high ground in the war against bugs. Most mosquitoes don’t fly that high. You can fight back the ants on one front at a time…and you’ll have fewer roaches. Although we were surprised with this apartment, we have found several advantages:

Water: As a friend Tracy said yesterday, if hot showers are a value to you, it’s best to live downstairs. Our two water towers on this center are at 2nd-floor and 3rd-floor height. You can probably imagine that the water pressure doesn’t blow you away in the upper apartments. I’ll admit, I’m a sucker for a warm shower even on a hot day, and while we have a barrel in the shower area for emergencies, a bucket-bath isn’t my idea of stress-relief.

Access: While this may seem obvious to those of you who are more architecturally-minded, we’re on the ground floor. This means we can step outside to greet someone in the courtyard, to dump a bucket of dirty water, to throw out a roach carcass (they float and thus are VERY hard to flush), or to put laundry out on the line. Saturday’s woodworking project was completed on a 3-foot ledge just off of our front porch, as if I had a sun-lit 30-foot workbench. Another benefit is the spigot outside our kitchen door that I use for rinsing the mud off of our shoes.

Not defying gravity: Even though we mistakenly hefted all of our suitcases to the 2nd floor on move-in day, that was the last time. We don’t have to do that anymore. Bike storage will be easier down here once those arrive.

Sound: Africa can be noisy. Taxis use toots of their horn to announce their presence and accept fares (declining a fare is done simply by leaving the traveler in the dust). Bars and Hotels in the neighborhood tend to turn their speakers outside (This is presumably to attract customers but, in fact, the only place where the music is NOT blaring is inside the establishment). The Xaviera hotel across the valley hosts weddings quite often and I’m amused by the DJ’s selections. It’s not unusual to hear Celine Dion (she sings in French and English) but my favorite after midnight serenades so far have been: “Over the Rainbow” by Judy Garland & “The Hokey Pokey”. Being on the ground floor (with a wall around the center) cuts down on some of the noise we would otherwise hear upstairs.

Cost: This apartment is smaller and cheaper. While we don’t have a guest room, we’re saving money.
Aesthetics: I can’t verify this for myself but apparently the paint and decor in this apartment is more pleasing than the other apartment.

So, in summary, flexibility is a virtue, the Lord is faithful, and often the unexpected can be better than the expected. 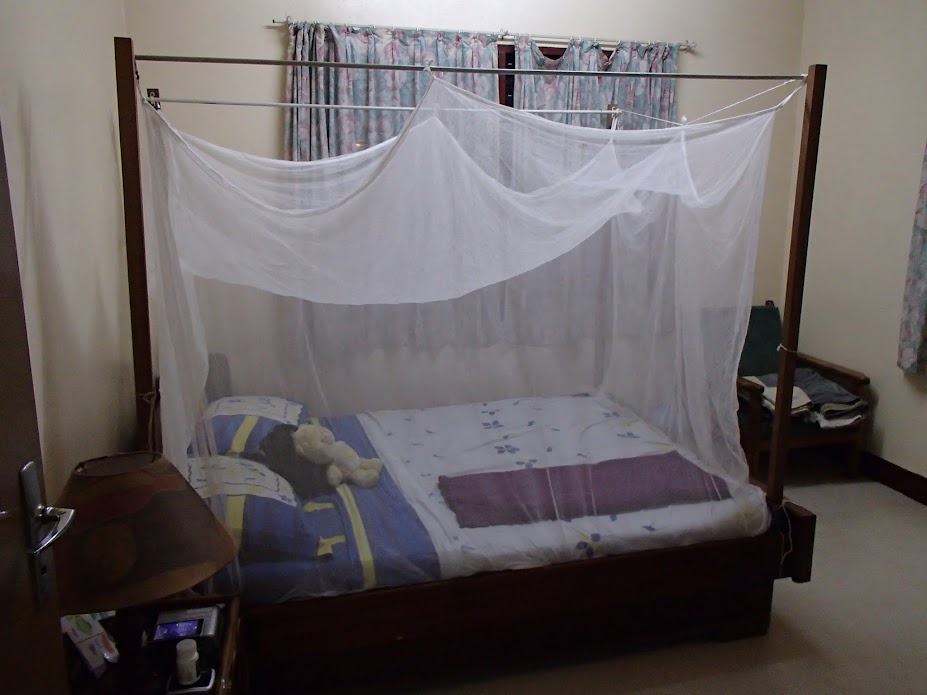