Posted by Matthew on March 30, 2011
Posted in: Uncategorized. Leave a comment

Today was a good day. (This post never got finished until now, so it’s a bit old.)

This morning, I woke up late, and tottled off to work. I was kinda grumpy at myself as this was the second day in a row I was late. Upon arrival, Jenni was working with a guy on the Bassaa Dictionary. She needed a way to search for all the words that had the same form in the plural as the singular, so that we wouldn’t have to duplicate them in the dictionary. Using a Regular Expression formula I had worked out the week before, she was able to find the simple ones.

Later, I realized we hadn’t covered all the possibilities, so we came up with a new version:

Anyways…we found all the possibilities, no matter where they were hiding in relation to the commas.

Next fire!?
Leo called. He couldn’t type his Bible in Paratext. I grabbed Kevin (the Newbie) and we trotted off to see him. Easy fix (2 clicks to change the view), and we left with his thanks.

Next.
Ginger called, having some trouble with installing SIL converters. I grabbed Kevin (the Newbie) and we trotted off to her office. Basic computing says un-install older versions of software before installing the new. I uninstalled 2.6.1, and 2.6 failed to go away quietly. I couldn’t install 3.1.1 either…we were stuck.

I chose a point just before, and as we rebooted, Microsoft quickly put things back in place. We installed 3.1.1 (which knew better than I how to un-install the old ones) and the document was converted. Lunch time!

Wednesday afternoon is professional development/training time in our department. After lunch, I went through the notes from Ouaga and picked out what seemed important to share with the team. We had a wonderful afternoon sharing what I had learned in Ouaga about Language Technology, and what they had learned about Linux and software. We learned a lot from each other.

Posted by Matthew on March 25, 2011
Posted in: Uncategorized. Leave a comment

Mary Gardner, 59, a British Bible Translator for Wycliffe who works in Togo, was killed by a bomb at a Bus stop In Jerusalem yesterday.

The articles I found say that this is the first bombing in Jerusalem in four years, and while many were injured, Mary was the only casualty. “We hoped these days were gone, but I didn’t really believe they were over,” said Aviad Hadad, 18, who was inside the bus station when the blast occurred. ”

In Togo (West Africa), she and her team finished the Ife New Testament in 2009, and she was in Jerusalem for 6 months of Hebrew studies. Having just visited Jerusalem myself, this is understandably close to home. I didn’t know her, but there are 2 people here in Ouaga from Togo who do.

Please pray for Mary’s Parents, Jerusalem, the Branch in Togo…and peace in general as we mourn her loss.

Can’t say I condone this video….

Posted by Matthew on March 24, 2011
Posted in: Uncategorized. 1 Comment

But I’m considering buying the soundtrack on iTunes…

I was searching the internet for information about secret government radio stations called number stations…and this youtube user had the same username as one of the stations.

In other weird news…

It’s not the photographer’s fault…there’s a large out-of-focus monster running around…and that’s extra scary to me..

The article on Fox news.

Posted by Matthew on March 20, 2011
Posted in: Uncategorized. Leave a comment

At a worship service here in Ouaga, we watched this video…

Pray for Japan…We know that in hard times, especially, in hard times, people will finally quit trusting in themselves and cry out to God. Pray that through the hands of God, his church, many will come to God or come back to God.

We aren’t supposed to understand it all, He is in control and we must trust Him..

Job 32:8 [God:] Who enclosed the sea behind doors
when it burst from the womb,
9 when I made the clouds its garment
and thick darkness its blanket,
10 when I determined its boundaries
and put ⌊its⌋ bars and doors in place,
11 when I declared: “You may come this far, but no farther;
your proud waves stop here”?

Job 42:3 [Job:] You asked, “Who is this who conceals My counsel with ignorance?”
Surely I spoke about things I did not understand,
things too wonderful for me to know.
4 You said, “Listen now, and I will speak.
When I question you, you will inform Me.”
5 I had heard rumors about You,
but now my eyes have seen You.
6 Therefore I take back my words
and repent in dust and ashes.

Down Time in Ouagadougou

Posted by Matthew on March 20, 2011
Posted in: Uncategorized. Leave a comment

I’m through week one of two at the Outilingua workshop here in Ouagadougou, Burkina Faso (West Africa), and as I sit on the front porch of my little apartment at SIL Burkina, I’ve got some time to look back. First, lets start by defining some of those terms in that mouthful-of-a-sentence.

This is an invented french word meaning language tools (Outil:tool and lingua:linguistic). This is an initiative of SIL Africa area to train French-speaking Africans to do…to put it simply, the sorts of things I do every day. This includes setting up translation projects, teaching training courses, and day-to-day support for linguists and Bible translators. Doug (the organizer) has been running this workshop every year since 2007 and inviting French-speaking people from the region.

I was invited as one of the instructors and writers of the training materials for the course, and led off with the Paratext training (in French, of course). We’ve already covered Fieldworks Language Explorer, Lexique Pro, Audacity, Teaching Couses, and Adapt It.

Ouagadougou means “where people get honor and respect” (according to http://en.wikipedia.org/wiki/Ouagadougou)” and is a major cultural center of West Africa and the economic and political capital of Burkina Faso. It is the annual home of Fespaco film festival (which I missed by about 4 days) and numerous massive artisan’s markets (which I was able to visit yesterday). The landscape is mostly desert, but several man-made dams provide shallow lakes for fishing and swimming. The country has been having student revolts in recent months, but other than closed schools, life goes on. 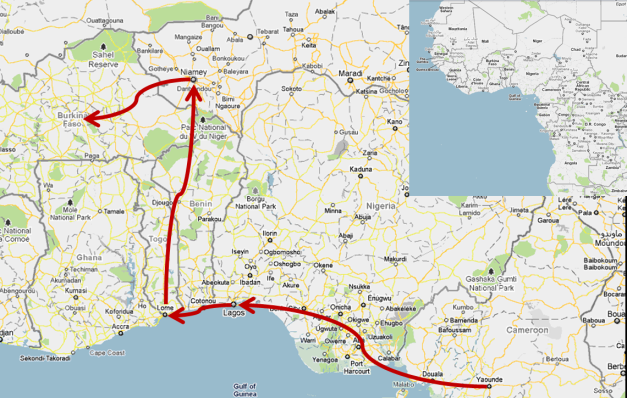 As you can see from the map of my flights, my arrival was quite an adventure. We were off to the airport early, somewhere between 2 and 3 hours as recommended. Although they have 3 gates, they only used 1 of them. This meant that we had to wait until the passengers on the previous flight were gone before we could go through security. Raymond, a Cameroonian colleague was with me. After a long discussion with the guard about me having 2 laptops and how he wanted one of them for his village, i moved on. Soon I realized Raymond was no longer in line, but behind the security curtain. He had been stuck in an airport for 12 hours last year with no money for food, so this time he came prepared. Not surprisingly, the security team wouldn’t let him take his fried fish and plantains onto the plane…so they sent him to the booth to either eat it or trash it. 30 minutes late, we flew out of Yaoundé around 9:45am. We stopped in Lagos, Nigeria before continuing on to Lome, Togo. There, we stepped off the plane into Florida weather, and went to the “transit” area and got at the end of the line to get our next ticket. We’re still not sure why, but a guy came down the line calling our names and holding out tickets…and we got to skip the line. Victor and Bolobo (to other participants we’d met along the way) had to wait for the whole line. Once inside, Bolobo and Victor had to go make sure their baggage was rechecked for Ouaga, and we went into the gates. There were 4 gates…er..doors and wall-to-wall people. My ticket said gate 1, so we sat near gate one. The people at the gate couldn’t tell us when we would be called, just that each one they did call was not our flight. We got to 15 minutes before takeoff time, and miraculously Victor heard them “whisper” over the PA to go to gate 3 (of course). After 20 minutes of waiting in line…we were sardined into a bus heading the 100 yards to the plane. Niamey, Niger…and then to Ouaga. Upon arrival at Ouaga, everything was as it should be, except that someone had removed some of the meat from Victor’s checked bag…imagine!

As we go into week 2, please pray for the instructors, the guys (and girl) here, and for peace in this country.